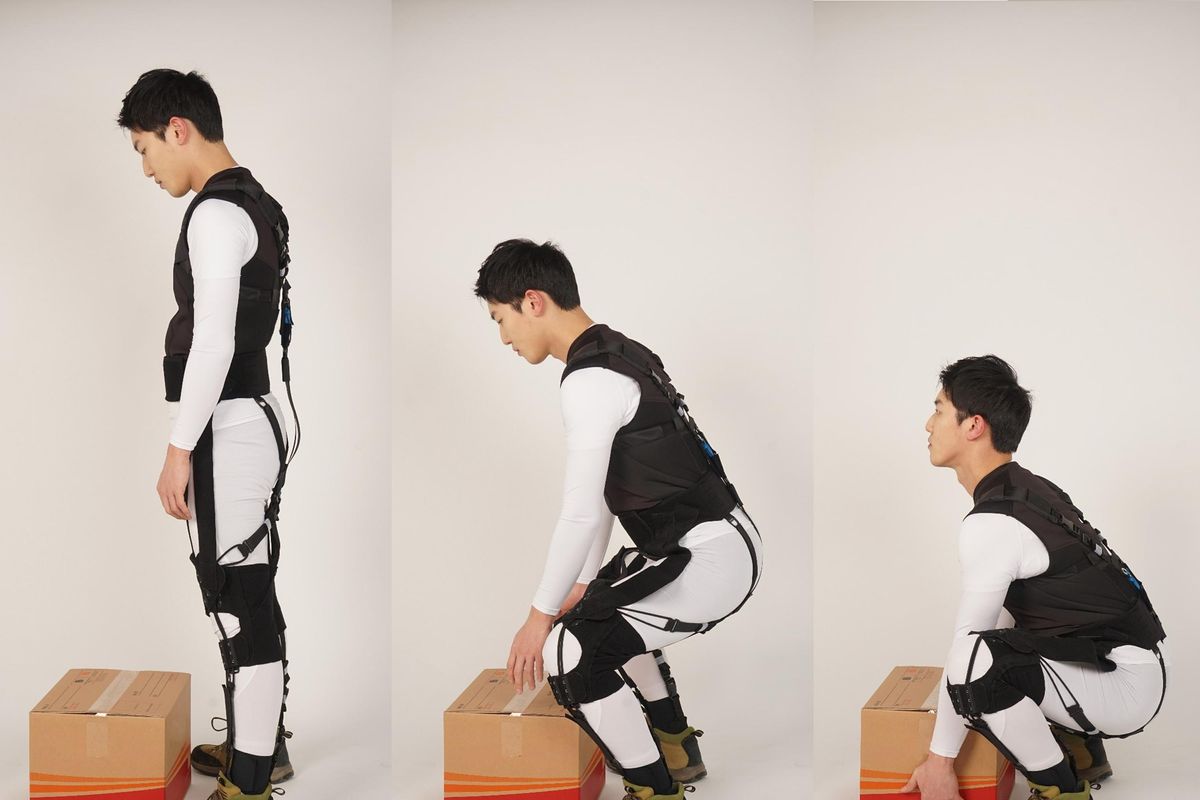 New advances in robotics can help push the limits of the human body to make us faster or stronger. But now researchers from the Biorobotics Laboratory at Seoul National University (SNU) have designed an exosuit that corrects body posture. Their recent paper describes the Movement Reshaping (MR) Exosuit, which, rather than augmenting any part of the human body, couples the motion of one joint to lock or unlock the motion of another joint. It works passively, without any motors or batteries.

For instance, when attempting to lift a heavy object off the floor, most of us stoop from the waist, which is an injury-inviting posture. The SNU device hinders the stooping posture and helps correct it to a (safer) squatting one. «We call our methodology ‘body-powered variable impedance’,» says, Kyu-Jin Cho, a biorobotics engineer and one of the authors, «[as] we can change the impedance of a joint by moving another.»

Most lift-assist devices—such as Karl Zelik’s HeroWear—are designed to reduce the wearer’s fatigue by providing extra power and minimizing interference in their volitional movements, says co-author Jooeun Ahn. «On the other hand, our MR Exosuit is focusing on reshaping the wearer’s lifting motion into a safe squatting form, as well as providing extra assistive force.»

The MR suit has been designed to mitigate injuries for workers in factories and warehouses who undertake repetitive lifting work. «Many lift-related injuries are caused not only by muscle fatigue but also by improper lifting posture,» adds Keewon Kim, a rehabilitation medicine specialist at SNU College of Medicine, who also contributed to the study. Stooping is easier than squatting, and humans tend to choose the more comfortable strategy. «Because the deleterious effects of such comfortable but unsafe motion develop slowly, people do not perceive the risk in time, as in the case of disk degeneration.»

The researchers designed a mechanism to lock the hip flexion when a person tries to stoop and unlock it when they tried to squat. «We connected the top of the back to the foot with a unique tendon structure consisting of vertical brake cables and a horizontal rubber band,» graduate researcher and first author of the study, Sung-Sik Yoon, explains. «When the hip is flexed while the knee is not flexed, the hip flexion torque is delivered to the foot through the brake cable, causing strong resistance to the movement. However, if the knees are widened laterally for squatting, the angle of the tendons changes, and the hip flexion torque is switched to be supported by the rubber band.»

The device was tested on ten human participants, who were first-time users of the suit. Nine out of ten participants changed their motion pattern closer to the squatting form while wearing the exosuit. This, says Ahn, is a 35% improvement in the average postural index of 10 participants. They also noticed a 5.3% reduction in the average metabolic energy consumption of the participants. «We are now working on improving the MR Exosuit in order to test it in a real manual working place,» Ahn adds. «We are going to start a field test soon.»

“Wearable devices do not have to mimic the original anatomical structure of humans.”

The researchers plan to commercialize the device next year, but there are still some kinks to work out. While the effectiveness of the suit has been verified in their paper, the long-term effects of wearing have not. «In the future, we plan to conduct a longitudinal experiment in various fields that require lift posture training such as industrial settings, gyms, and rehabilitation centers,» says Cho.

They are also planning a follow-up study to expand the principle of body-powered variable impedance to sports applications. «Many sports that utilize the whole body, such as golf, swimming, and running, require proper movement training to improve safety and performance,» Cho continues. «As in this study, we will develop sportswear for motion training suitable for various sports activities using soft materials such as cables and rubber bands.»

This study shows that artificial tendons whose structure is different from that of humans can effectively assist humans by reshaping the motor pattern, says Ahn. The current version of the exosuit can also be used to prevent inappropriate lifting motions of patients with poor spinal conditions. He and his colleagues expect that their design will lead to changes in future research on wearable robotics: «We demonstrated that wearable devices do not have to mimic the original anatomical structure of humans.»