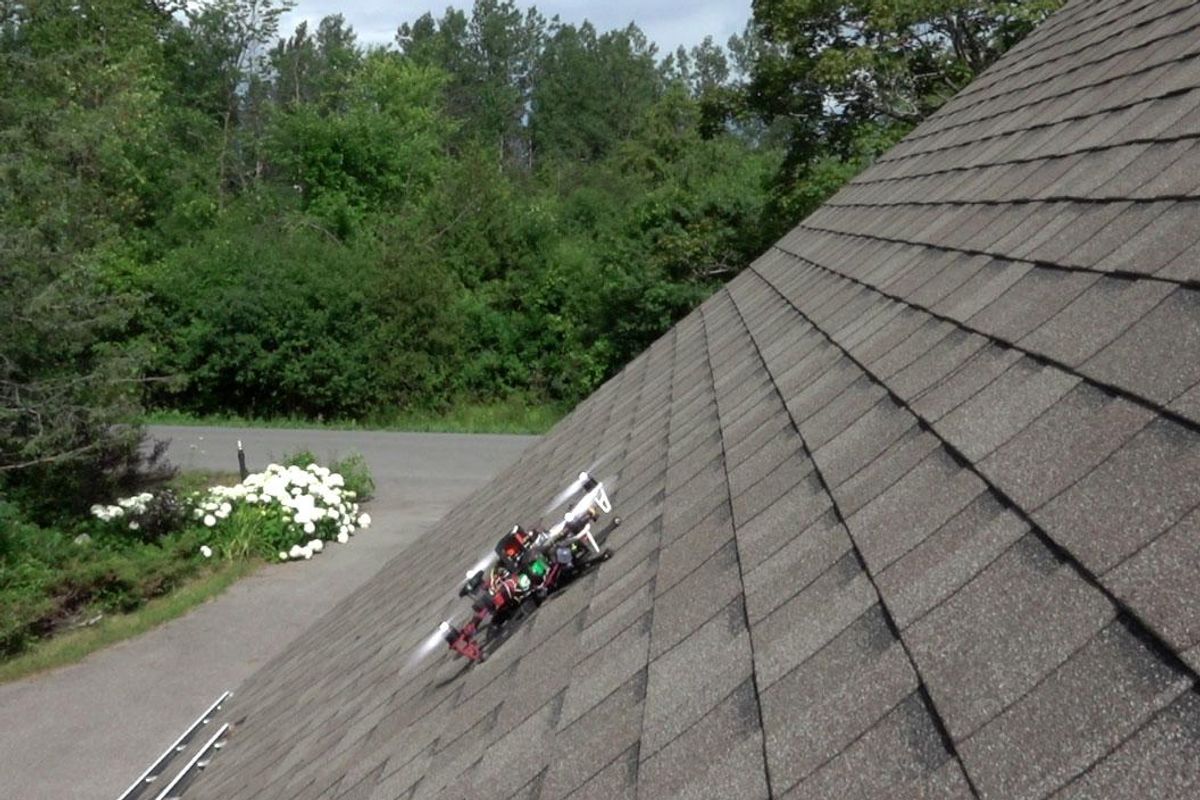 This article is part of our exclusive IEEE Journal Watch series in partnership with IEEE Xplore.

Drones are able to complete a wide range of useful tasks, but they often require specific conditions in order to land safely. Ideally, most drones need to approach a flat surface at a slow enough speed to avoid bouncing or crashing. One group of researchers in Canada has devised a novel solution, however, which allows drones to land on impressively steep inclines of up to 60 degrees, and at speeds up to 2.75 meters per second.

Through a series of experiments, they demonstrate how their approach can be used to safely land drones on the steep rooftops of homes. The results are described in a study published in the July issue of IEEE Robotics and Automation Letters.

“At high impact velocities and on inclined surfaces, commercial multirotors tend to bounce, flip over or even break upon impact, due to their stiff landing gear,” explains John Bass, a PhD student at the Université de Sherbrooke’s Createk Design Lab in Sherbrooke, Québec, who was involved in the study. “Our general approach for landing a quadrotor on a steep incline is to combine two technologies—friction shock absorbers and reverse thrust.”

They then put their drone to the test, landing it on roofs and landing pads at various speeds and inclines. Bass notes that, given how the drone is able to land on a surface as steep as 60 degrees, this means is capable of landing on most North American rooftops, which typically have a pitch less than 53 degrees.

This capability could be useful for recharging, surveillance, or emergency landings purposes. Notably, being able to land at high speeds—with less precision and sensing requirements—could be particularly useful during emergency landings.

The team plans to continue to explore novel ways of landing drones. The lab has previously landed drones on vertical walls and lakes.

“[Our] goal is to further increase the capabilities of UAVs by landing in other difficult scenarios such as boats in harsh sea conditions, on icebergs, and on fast moving ground vehicles,” says Alexis Lussier Desbiens, a professor of mechanical and robotics engineering at the Createk Design Lab who was also involved in the study.

“These scenarios each bring their own new set of challenges, such as the ship’s linear and angular motions when landing on boats, the strong drag force when landing in high wind or at high speed, the turbulent air motion near boats, icebergs and fast-moving vehicles, and the slippery surfaces of icebergs,» he adds.