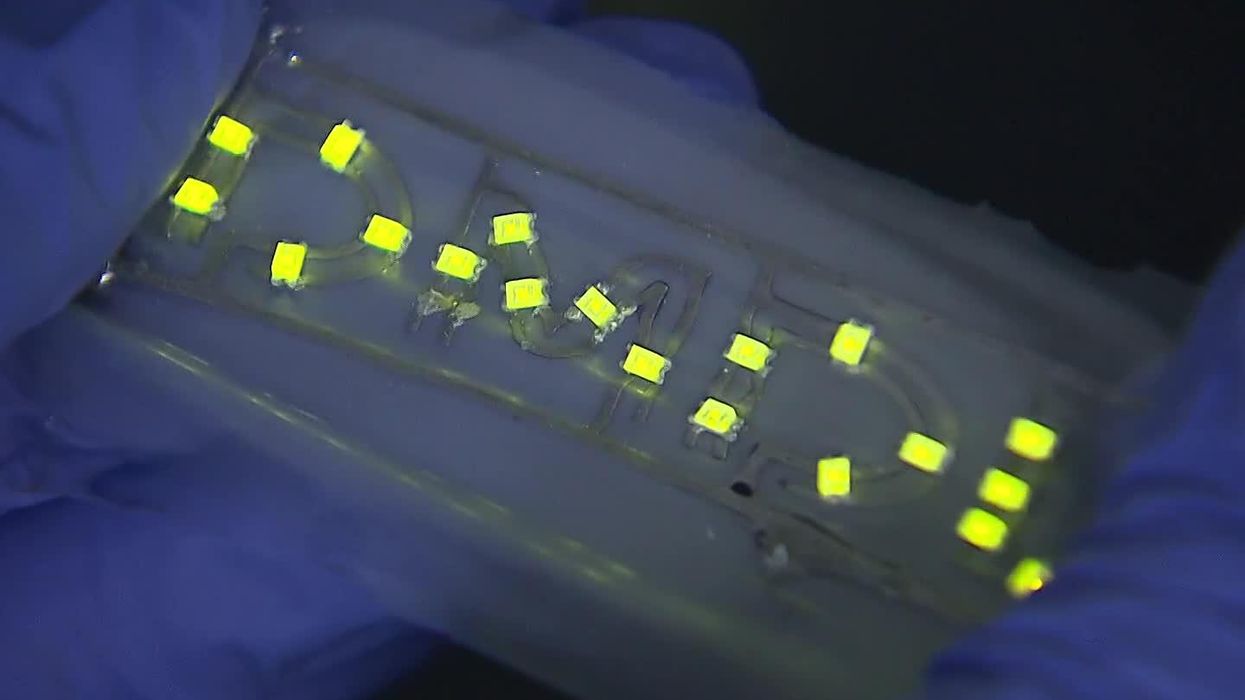 A team in Korea has used sound waves to connect tiny droplets of liquid metals inside a polymer casing. The novel technique is a way to make tough, highly conductive circuits that can be flexed and stretched to five times their original size.

Making stretchable electronics for skin-based sensors and implantable medical devices requires materials that can conduct electricity like metals but deform like rubber. Conventional metals don’t cut it for this use. To make elastic conductors, researchers have looked at conductive polymers and composites of metals and polymers. But these materials lose their conductivity after being stretched and released a few times.

Liquid metals, alloys that stay liquid at room temperature, are a more promising option. Gallium-based liquid metals, typically alloys of gallium and indium, have caught the most attention because of their low toxicity and high electrical and heat conductivity. They are also tough because of an oxide skin that forms on their surface, and they stick well to various substrates.

To make conductive circuits with gallium-based liquid metals, researchers typically spray or print droplets of the material on a stretchy plastic substrate, or embed them inside a rubbery polymer. The oxide skin typically has to be broken so the droplets can combine to form a conductive path. The problem with these approaches is that the liquid metals can leak out after a while, says Jiheong Kang, a professor of materials science and engineering at the Korea Advanced Institute of Science and Technology.

So he and his colleagues used an acoustic field to connect liquid metal droplets which they had first embedded in a polymer. The researchers use droplets that are 2 to 3 micrometers wide on average, smaller than what others have used before, to reduce the chances of the droplets breaking and leaking out the liquid metal.

Others have previously made stretchable circuits by depositing ultra-thin layers of metal in web-like networks or serpentine patterns. “With our new material, we demonstrated the first elastic printed circuit boards without any structure engineering,” Kang says.

The team made their stretchy conductors with four different liquid metal alloys and 15 different polymers. To demonstrate the conductors’ use, they made stretchable displays in which the liquid metal networks connected micro-light emitting diodes [above]. They also made a highly stretchable heart rate monitoring sensor that could be attached to a volunteer’s skin and measure blood circulation using light [below]. The results appear in the journal Science. 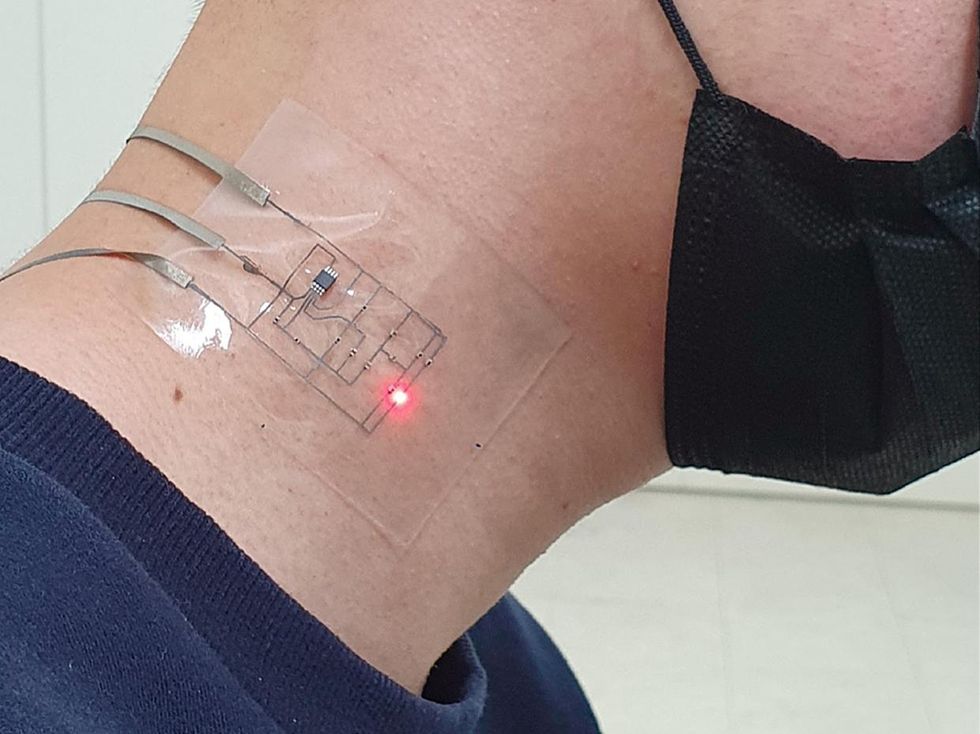 The method “helps to overcome a major challenge in creating conductive circuits with [gallium liquid metal]-polymer composites,” write Ruirui Chao of the University of Queensland in Australia and Shi-Yang Tang of the University of Birmingham, UK in an accompanying perspective piece to the Science paper. “But the composites still face a number of manufacturing challenges.” For instance, it is hard to precisely control the size of droplets with known techniques to make them.

Kang says that he and his colleagues plan to work on improving the resolution of the pattern by finding ways to deposit them closer to each other. They also plan to further increase the conductivity of the liquid metal circuits.